The Eichler I lived in, Sunnyvale, California, circa 1969

I was utterly in the dark on this until yesterday, some 48 years later.

I came across a picture of an “Eichler” (houses designed by Joseph Eichler, mostly in the San Francisco Bay and Los Angeles areas like one of two we lived in when I was in the 3rd-6th grades in Palo Alto and Sunnyvale (the Peninsula). 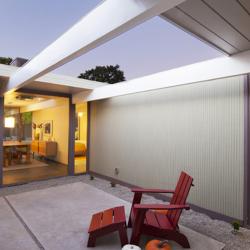 Atrium and bedroom off of it.

It w the house in Sunnyvale that was striking, and I realized yesterday looking at floor plans and old photos that it was this house that gave me my sensibilities about designing space, use of space, clean lines and the introduction of nature within living space, as well as a very strong Japanese minimalism that has always attracted me in a very strong and visceral way.

Having lived for a time in a house designed by Frank Lloyd Wright, Eichler set out to make California Modern homes available for he masses — and he succeeded. These homes were incredibly well constructed and their design holds up today like true art. 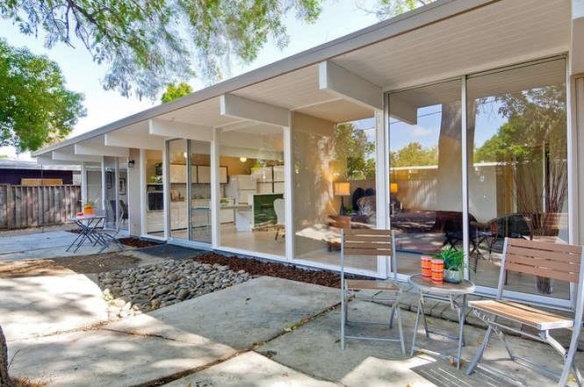 Visionary backside of an Eichler.

My being in grades 5-6, this was a very formative time in all areas. But I had no idea until yeasterday that my design and artistic sensibilities were being formed in that little room off the atrium (it was magical having a sliding glass door into that protected outside space). The backyard was beautiful as well with a long line of windows floor to ceiling and a giant tree in the corner of the yard which, at the top, gave a long view of the entire area all the way to the Bay.

So we have come full circle. In 1977 we watched in amazement having never seen anything like Star Wars: A New Hope — as that ship carrying Princess Leia flew over our heads in the theater and we gasped having no idea that a ship 400 times as large was in hot pursuit.

That, of course, is how Rogue One ends— with that ship escaping it’s ship of origin and being hunted as the Princess looks for a place to hide the stolen Death Star plans.

Ah the miracles of CGI. There she is, Carrie Fisher, not only not dead, but young and beautiful like circa 1977.

And there are a host of other characters who return from the dead as well —the most significant being Grand Moff Tarkin (Peter Cushing) who has significant screen time (actually more than when he was alive; I mean, how do they work out a contract for that? How does he get paid and how much?)

But before we go THERE, can I just mention that the whole premise is a bit silly? I mean these are the plans for the entire Death Star. Did they not make back-ups on a USB hard drive? And if so (and we know they did because they built another one after the first one blew up — do you think they did that from memory? “Say Bill, after we laid down the titanium girders in sections 18.876 through 23,064 do you remember how we wired those 4500 different leads through 7 miles of conduit?”) — If it takes the rebellion 35 minutes to evaluate the plans and find the weakness of the Death Star don’t you think someone ON the Death Star might look at the plans once they have been stolen and look for a weakness?

Or is it just me? 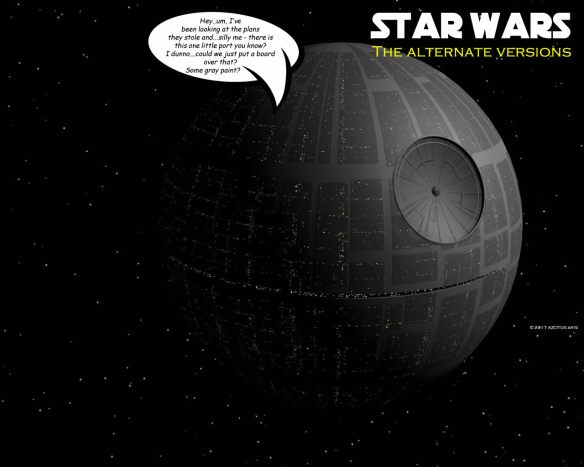 I hate sequels. I assume they are fun for the reunited cast and lucrative for the producers, but they are generally awful for the audience.

Just mentioning City Slickers 2 or Highlander 2: The Quickening, evokes that sickening feeling of being duped by a dreadful second production.

The problem with sequels is that there is usually no more story to tell. The original film had a beginning, a middle and a definitive end. But as quick as you can say “box office grosses,” writers are being hired to resurrect dead characters and figure out ways of doing the same successful story over again…yet…um…differently.

Where will it end? Can we be saved from the eventual Gump 2: Forrest Through the Trees ?

Before he started recycling characters, George Lucas figured out how to give people more of what originally delighted them. He started this in 1997 with Star Wars: The Special Edition. Opening on January 31, this re-mastered version of the 20-year-old hit had added scenes, improved visual effects, and better sound. Scenes with Jabba the Hut, Boba Fett and a more “scummy and tyrannical” Mos Eisley space port promise to greatly enhance the ground-breaking original. What fun!

We need a new cinematic saying: “What goes around comes around in the director’s digital re-master with additional scenes,” (DDRAS). The rule should be: If the story isn’t truly over, do the sequel; but if it’s over, do a DDRAS.

And who says it has to stop with just one re-mastering of the original? The eight Star Wars films invite a host of possible “alternate versions” for re-release.

Part two of this series will start with a few “Alternate Versions” working off the original Star Wars trilogy.